ICSI, PICSI and IMSI methods, what is the difference and differences? 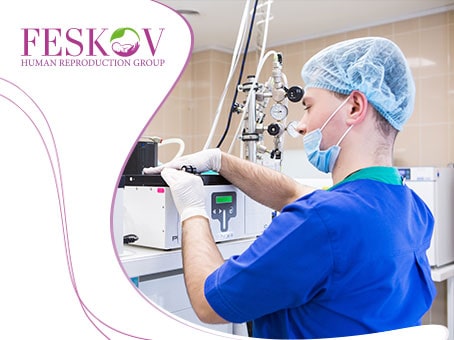 The natural process of conceiving a child has not been a secret for everyone for a very long time. However, at the micro level, it is not so simple. The male reproductive cell is a spermatozoon, 50 microns in size, after entering the female vagina, it must overcome the road thousands of times larger than itself, overcome all obstacles, and then break through all the oocyte membranes and merge with it.

This requires a lot of energy and strength, so only the best specimens are capable of this feat. Today, problems with sperm, when a small number or no such cells at all, have become almost the norm. About 40% of cases of infertility are associated with the male factor. Feskov Human Reproductive Group uses reproductive services, effectively solving problems of male infertility.

Decreased sperm quality is commonly associated with male-type infertility when:

When a man has at least one such indicator, doctors can diagnose his infertility and recommend that he undergo appropriate therapy.

Sometimes, for everything to work, it is enough for a man to transform his lifestyle, get rid of bad habits, and undergo hormone treatment. And if the sperm still cannot fertilize the egg, doctors offer innovative assisted reproduction techniques.

In this case, IVF (artificial insemination) or conception is always meant in vitro, that is, outside the female body. In this case, the female body is first stimulated by hormones so that the ovaries produce as many good eggs as possible. Doctors remove oocytes from the female body, prepare them. Then they take fresh sperm from a man, which also undergoes processing, and place them in a Petri dish, where conception takes place directly. Then, after 2-5 days, the fertilized female cell forms into a viable, healthy and good embryo that is transferred into the uterine cavity of the expectant mother.

At the dawn of the development of ART it looked like this. However, sometimes, even being in the same vessel, the sperm cannot penetrate the egg. Since it may be weak, with developmental pathology, with reduced activity, or have other qualities that prevent him from fertilizing the female reproductive cell.

Therefore, the specialists were able to expand the capabilities of this technique. New techniques for selecting the best representatives of sperm and manual fertilization of oocytes with them make it possible to forget about male problems.

ICSI, or sperm injection directly into the oocyte, is a pioneering IVF technique that was invented by scientists reproductive specialists first. Using an electron microscope, which magnifies the picture 400-600 times, the doctor selects the hero-sperm. Thus, the specialist fixes mutations, pathologies, monitors the activity of the cell in order to fix his gaze on the healthiest specimen. Since healthy children are obtained only from a full-fledged sperm.

The selected cell is fixed with a microscopic needle, which perforates the surface of the egg and releases the sperm directly into the cytoplasm. This is how artificial insemination occurs by the hands of a doctor with all the oocytes taken from a woman.

Further, everything goes according to the IVF protocol: the cultivation of the embryo, its transfer into the uterine cavity, diagnosis of pregnancy.

Indications for the procedure:

The addition of ICSI to in vitro conception significantly increases the likelihood of a miracle of pregnancy and the birth of a normal baby.

Advances in technology, the emergence of even more powerful microscopes, as well as the desire of doctors to improve manipulation, have led to new research in this area. As a result, reproductologists have two more additional techniques - PICSI and IMSI.

PICSI or physiological sperm injection into the egg is complementary to ICSI. The recognition of its physiological activity is added to the 400-fold magnification and visual quality of the germ cell. This is determined using special media that the doctor places in the vessel to the sperm. Thus, an imitation of conditions occurs when the sperm cell seeps through all the membranes of the oocyte.

The quality of maturation, energy, physiological endurance, the ability to effectively contact the egg - these and similar characteristics monitored by a reproductive specialist. Therefore, when deciding to choose one or another instance, the doctor takes into account not only visual, but chemical and biological indicators.

Further, everything goes on the right track - the usual IVF protocol plus ICSI. Facts show that when using PICSI, the chances of a healthy pregnancy increase by 25-35%.

IMSI, or morphologically matched sperm injection, is another addition to the ICSI process. What makes this procedure different from previous techniques is the use of an even more powerful microscope of the latest generation, with a magnification of 6,000 times.

This method became possible only after the establishment of modern magnifying technology in the service of medicine, namely mega-powerful microscopes. Now doctors observe with their own eyes not only the activity and vitality of sperm, but can also make their morphological selection.

And what is it? Almost every man has some percentage of spermatozoa with a pathological morphological structure: two heads, a forked tail, no nucleus in the cell and other small mutations. If we consider a variant of the norm, then there should not be many of them. If the number of modified copies grows, then pregnancy does not occur. Or a baby comes into this world with developmental pathologies.

And the IMSI technique makes it possible fertility specialist to select the best sperm for fertilization of the egg. Then, as always - IVF plus ICSI. The practical application of the technology shows that it increases the success rate of IVF up to 70%. That gives hope for the birth of a child even in the most difficult circumstances of infertility in a man.

Indications for action are identical to ICSI. However, doctors strongly recommend it if a man has a family history of congenital genetic abnormalities, mutations, or hereditary ailments. With the use of IMSI, the chance of having a child with a congenital ailment tends to zero. In addition, it is now widely used pre-implantation screening of an embryo before transferring it into the female uterus. That 100% guarantees the transfer of only an absolutely healthy embryo and the birth of a normal child, without pathologies.

Thanks to the development of reproductive technologies, pharmacy and medicine in general, now, even a man with critical reproductive problems can have a child of their own. Therefore, specialists at Feskov Human Reproductive Group recommend not to give up and try all possible ways to make your family happy with a healthy own baby. A variety of programs for the cost without additional payments will help you to choose the most suitable option from Standard to VIP. However, progress cannot stand still, and perhaps even more effective and safe methods will soon appear so that all people can have their own children!