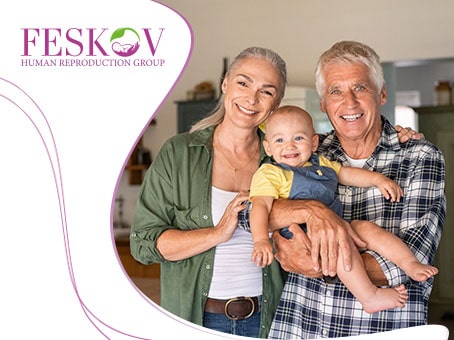 Nowadays, the birth of a child after 35 years is no longer surprising. However, modern women successfully produce children at the age of 40-50! Of course, the ticking of the biological clock cannot be canceled. And the truth is that age matters if you only target the natural process of conception.

However, reproductive innovations in medicine make it possible to consider the option of having a baby for women who have crossed the threshold of 40 years and are approaching 50. Egg donor services offered by Feskov Human Reproductive Group, give a chance for motherhood even to women who have problems with oocytes.

Pros of having a baby later in life

According to unspoken traditions, people have their first child between 20 and 30 years old. Most often, the second baby appears several years after the first one.

However, modern reality dictates new rules. People want to live for themselves, realize themselves in their careers, travel before committing themselves to marital and parental obligations. Or maybe a fateful meeting with a partner, from whom you want children, will happen after 40? It's also quite normal not to want to become a mother at a young age and then change your mind.

When a person reaches a certain age (40-50 years), often he already has some kind of financial stability, life experience and flexibility that can make it easier to care for and raise a child. However, do not think that all the answers to the questions that arise will automatically come. No one has succeeded in this yet, regardless of the number of years.

Children with a large age difference often bring families together, make them more friendly. Seniors are actively involved in caring for the younger and become more responsible.

Even if the family already has children, the newborn will give a new happiness of parenthood, which can be enjoyed more fully than in previous times.

What to consider in late pregnancy?

If at some points, late pregnancy can be easier, then conceiving can be a problem. Also, it automatically falls into a high-risk group due to:

Also, you need to take into account the mandatory changes in lifestyle. With the birth of a baby, it is no longer possible to live for yourself in retirement or go on a trip. The next couple of years will have to devote all of himself to the little man.

In addition, there are risk factors related to the baby:

Therefore, it is advisable to visit a specialist to find out about the opportunities and risks.

The process of conception at 50 years old

From a biological point of view, a woman is born at once with the entire supply of eggs, which is irreplaceable. With the onset of puberty, she loses one in each cycle. However, their number continues to decline until the woman reaches menopause.

This means that it is extremely difficult to become pregnant naturally at age. Moreover, the quality of oocytes also decreases. Which entails chromosomal abnormalities, due to which the pregnancy is terminated in the early stages.

People over 35 who have been unsuccessfully trying to conceive a baby for six months are advised to visit a fertility specialist. And at 50 - this must be done without fail.

To stimulate ovulation, your doctor may prescribe fertility medications. This is especially useful during perimenopause, when the cycle becomes unpredictable. Sometimes, even taking such drugs is enough for a successful pregnancy. As they increase the number of mature oocytes during one cycle which gives the sperm an extra chance.

If that doesn't work, your doctor will advise on other options available. For example, IVF (in vitro fertilization), when eggs are removed from a woman's body, fertilized in a laboratory, and the ready embryo is placed back into the uterus.

In one IVF cycle, several oocytes are used as a safety net. Thus, no, one or several embryos may be obtained.

By the age of about 50, the doctor may recommend transferring several embryos at once so that at least one can be implanted for sure. However, it happens that everything is implanted, guaranteeing a multiple pregnancy which immediately increases the risks during gestation. Therefore, it is advisable to discuss all this with your doctor.

In addition, poorer egg quality can lead to chromosomal abnormalities in the fetus. That is why it is imperative to do genetic screening of embryos with IVF. This will increase the chances of a completely healthy pregnancy.

Does it make sense to use frozen eggs?

Cryopreservation of oocytes or freezing female germ cells at a young age is a great option to have a baby later. However, the method involves the use of IVF. The idea is that the oocytes will be frozen until the woman is ready to use them. If this time will come at all. You can also freeze ready-made embryos.

Cryopreservation does not guarantee a 100% successful pregnancy. But, at times increases the chances of this. In some cases, it is from thawed eggs that pregnancy occurs even faster.

What about a gestational carrier?

In such cases, it is usually recommended to use a surrogate mother or gestational carrier. This is the woman who carries the baby before the due date.

At Feskov Human Reproductive Group you can participate in a surrogacy program with egg donation. As a result of IVF, embryos created from donor oocytes are implanted into the surrogate. That guarantees the birth of a completely healthy baby.

Engagement options the gestational carrier and donor or own eggs depend on the woman's reproductive health and her preferences.

Difference in symptoms of pregnancy and menopause

A home pregnancy test, and then a doctor's check with a blood test for hCG is the only reliable way to find out if conception has occurred.

Therefore, you should not rely only on symptoms, since the first signs of pregnancy can be like menopause. For example, mood swings and unreasonable fatigue. By the way, they can also signal the approaching menstruation.

Real menopause occurs when there is no period for more than a year in a row. And if menstruation occurs more often than usual, this may indicate a period of perimenopause. When the oocytes are still there, there also is the ability to become pregnant.

Cycle monitoring and symptom tracking with a pregnancy test is a priority. It should be remembered that morning sickness is the initial sign of pregnancy that does not occur during menopause.

What is pregnancy at 50?

As a woman's body ages, the process of carrying inside another person can be much more difficult than at a young age. A woman may experience an increased level of discomfort during pregnancy:

However, this happens to all pregnant women. For a 25-year-old girl, this is also not an easy walk. Just as each pregnancy is individual, so each subsequent child can cause different conditions.

Even if a woman already has a baby, whom she gave birth to quite recently, this does not mean that everything will proceed the same way. You need to be open-minded about the process and be ready to experience it in a different way.

The most important difference between late pregnancy is increased control by doctors. It should be understood that the woman's age will be the subject of discussion throughout the entire process. Terms “old-bearing”, “elderly mother” will be used universally in relation to pregnancies with increased risks. You shouldn't attach any importance to this. Since similar names are used for all pregnant women after 30 years.

The most important thing is to keep your doctor informed about any discomfort or disturbing symptoms. Perhaps the specialist will suggest any remedial measures.

Pregnant women aged 40-50 need to take into account the additional concerns associated with the processes of labor. More often than not, experts recommend women to have a caesarean section because of their age. And also, due to the completed fertility treatment, which may be the cause of preeclampsia.

Caesarean is prescribed during a complication such as placenta previa. When the placenta lies on top of the cervix, it can cause severe bleeding.

Only a doctor can give permission for a natural delivery. At the same time, he will carefully monitor the condition of the pregnant woman due to the risk of bleeding.

While it may not be easy at all, the desire to have a baby at 50 is quite feasible if there is no menopause yet. Modern medicine and Feskov Human Reproductive Group offer successful options for finding conscious parenting.

However, before trying to conceive a child, you need to talk to a specialist about reproductive and physical health, the presence of any risk factors that might interfere with this.

The number of eggs naturally decreases exponentially during all 40-50 years of a woman's life. Therefore, if you cannot conceive a child on your own after 2-6 months of active efforts, you should contact a fertility specialist.

You should never despair and think that it is too late to get pregnant. Families vary and reproductive medicine is constantly evolving. The decision to have a baby at a later age will bring many awards to both the woman and her family!