Why couldn't Elton John adopt a child from Ukraine and chose surrogate motherhood? 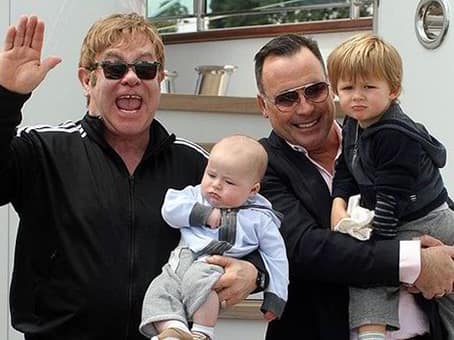 The surrogate motherhood becomes more and more popular every day. And this is quite understandable since many people can make true their dreams on birth of a child with the help of reproductive technology. Now the family couples with infertility diagnosis, single men and women to give birth to their genetically native child with the help of surrogate mothers. However, the society still not fully recognized surrogate motherhood. Some people still consider that this reproductive technology is not fully acceptable, that children become a commodity, and it is immoral. The society is much more favorable to adoption a child from children's home. The people condemning surrogate motherhood consider that this is adoption that is a right step for those people who want to have children but cannot give their birth by themselves.

But in fact, everything is not so simple. Adoption is, of course, a very good and noble deed, but adopting a child may be much more difficult than might seem. At the same time, use of surrogate motherhood, if it is legal and legalized, has much less underwater rocks, against which the dreams about replenishment of the family may break. A vivid example of this is provided by the history of by Elton John, who wanted to adopt a child from Ukraine, but he did not succeed in it, and finally chose surrogate motherhood.

In 2009, Elton John visited a specialized children's home in Makeyevka where children with HIV/ AIDS diagnosis live. There he saw 14-month HIV-infected Lyova who conquered the singer’s “heart” at once. Elton John and his partner David Furnish, a Canadian Director, with whom he is officially married, were thinking about their child for a long time. But always they found arguments against it. For example, too busy schedule that may prevent them from spending a lot of time with their child, age (then Elton John was 62 years old and David Furnish was 46 years old). All these arguments “worked” until the couple met little Lyova.

They loved the baby at first sight and decided to adopt him.

However, this proved to be impossible. Adoption of children by the couples of the same sex is not allowed in Ukraine. And even the fact that Elton John is a star of world magnitude did not change the situation.

This failure has upset the couple very much, but the thought of expanding the family no longer gave them peace. Then Elton and David decided that they want to give a birth of their own child. Thus on December 25, 2010, there was born their son Zachary Jackson Levon, the surrogate mother gave birth for them.

Elton John and his partner were very happy. “My son is the best thing that happened to me in this life. We surround him with all the care and love we are capable of, and he gives us love many times more! I sing him lullabies and David reads fairy tales to Zachary” – said Elton John.

Elton and David so liked to be parents that they decided to use the services of a surrogate mother once again, and on January 10, 2013, there was born another baby Elijah Joseph Daniel Furnish-John.

Surrogate motherhood will help to make true dream about child

The example of Elton John shows that surrogate motherhood is a good alternative to adoption, which often turns out to be more real and accessible. In addition, in this case, you have an additional plus since the surrogate mother can carry your genetic child.

Feskov Human Reproduction Group offers full-cycle reproductive programs including IVF, use of donor eggs, services of surrogate mother, complete medical and legal support. Feskov Human Reproduction Group offers you to choose the packages that guarantee birth of your child, as well as additional services, such as genetic testing of the embryo for genetic diseases before transplantation into woman’s uterine cavity and choice of child's sex.

Are you dreaming about replenishment of your family? Use assistive methods of reproductive medicine, and happiness will surely smile upon you!