Should I Freeze my eggs to extend my fertility? 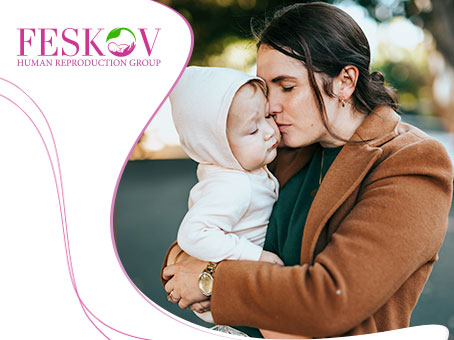 Freezing eggs in order to use them for future pregnancies is an increasingly popular service. And it is a rather controversial but important issue in the world of fertility. A gynaecologist not always offer this option to women who do not intend to have children at the moment. This is not because it is bad, but because it is quite difficult.

Before deciding on oocyte freezing, you need to know exactly what the process entails, the risks, the success rate, the costs of the procedure. Manipulation can be a promising option for some women, but it is not an easy decision.

Both fresh and frozen eggs, thanks to which more than 11,000 healthy babies have already been born, are successfully used for reproductive programs at Feskov Human Reproduction Group!

What is social (selective) egg freezing?

First, you need to familiarize yourself with the natural aging process of the ovaries. A woman is born immediately with all the eggs, the supply of which is not replenished. With age, the number of oocytes in the ovaries naturally decreases.

This process begins even before birth. In a 20-week-old female fetus, the ovaries contain 6 to 7 million oocytes. When a girl is born, she has just over 1 million eggs left.

Unlike men, whose reproductive systems, after puberty, create about 250 million new sperm every day. Ovaries cannot produce new eggs. Male fertility also declines with age, but not as dramatically and rapidly as in women.

With age, oocytes decrease not only quantitatively, but also their quality decreases. This is why the risk of miscarriage at 37 is higher than at 27.

Ideally, from a purely biological point of view, if a woman wants to have genetically related children, then she needs to get pregnant before the age of 35. Better yet, up to 30 years old. But many people are not ready or do not want to have children by their 30s.

This is where the selective or social freezing of eggs comes into play. If a thirty-year-old woman is sure that she does not plan to become pregnant for another 10 years, then she can resort to the technology of cryopreservation of oocytes. Of course, she can always try to conceive on her own. As it happens most often. However, if pregnancy still does not occur, you can always take these frozen germ cells and use them for IVF.

Cryopreserved eggs will be of higher quality, recovered 10 years or more later. These frozen “young” eggs are more likely to become fertilized, produce healthier embryos, lead to clinical pregnancy and the birth of a healthy baby. In a way, it's like becoming an egg donor for yourself in the future. However, there will only be as many oocytes that were once frozen.

Features of selective freezing of oocytes

Selectively “preserving fertility” is a new trend. However, oocyte freezing itself is not. The procedure for medical reasons has been around for about 20 years.The first live birth from a previously frozen egg occurred in 1986.

Until recently, cryopreservation was used only for medical reasons:

Early freezing methods were less successful. Since the technology of slow freezing was used, in which ice crystals sometimes formed in the cells, damaging the oocytes during thawing. However, it was better than nothing for people with health problems.

Then a new method was developed - vitrification. This is an ultra-fast liquid nitrogen freezing method that prevents ice crystals from forming. Eggs frozen in this way have much better survival rates. In other words, they are more likely to undergo the freezing, thawing and fertilization process than slow frozen oocytes.

At first, vitrification was considered experimental. But in 2012, the American Association for Reproductive Medicine (ASRM) removed that label. Therefore, now, many clinics offer patients social freezing of oocytes.

The most common causes of selective freezing are:

As case studies show, not having a husband or a long-term partner is the number one reason women choose to freeze their germ cells.

Although some doctors recommend women who need to postpone childbirth, cryopreservation, they cautiously explain that the procedure will still not give the fertility that would be inherent in natural attempts to become pregnant during the period when the oocytes were frozen.

The best chance to get pregnant is to try it now. But when planning to have a baby later, cryopreservation will increase the chances of pregnancy later in life.

Sometimes the procedure is presented as "fertility insurance". This is somewhat misleading. With insurance, there are always payouts. However, with egg freezing there are no guarantees. It is just another option increasing the chances of conception if it cannot be done naturally in the future.

There is a misconception that one cryo egg equates to one menstrual cycle. So one might think that freezing 12 oocytes at 33 would give the "annual fertility rate" that one might have at 33, but this is not the case.

With freezing, there are many risks. The oocyte must:

According to statistics, only 2 to 12% of cryo oocytes lead to the birth of a baby.

This is not the same as the higher live birth rate per total egg count.

Therefore, it is recommended to freeze several oocytes. Approximately 8-15 eggs under 35 years of age. For women over 35 years old, the decision must be made by the doctor on an individual basis.

Sometimes, it will be necessary to go through several cycles of hormone therapy in order to get enough cells. It depends on the body's response to hormones, age, ovarian reserves, and the doctor's skill. The more cycles, the more costs. At the same time, doctors cannot say anything about the quality of oocytes during freezing (respectively, the chances of success) until they are thawed and used in IVF.

What do you need for the procedure, age range?

It is difficult to determine the ideal age for cryofreezing of eggs. On the one hand, the younger you do it, the more chances you have to succeed. On the other hand, they may not be needed.

The older the woman, the less likely the resulting oocytes will be of sufficient quality to ensure a successful delivery. It may also be difficult or impossible to obtain the desired number of oocytes. A test for ovarian reserve of the ovaries will help. If the chance of getting mature eggs is very low, it is best to skip cryo altogether. It most often occurs in women over 35.

The golden mean is from 20 to 35 years old. In addition, there is a possibility that it may take several cycles to obtain a sufficient number of cells. And that means higher cost and more fertility drugs.

Freezing eggs is a procedure of more than one day and not even one week.

The extracted oocytes are sent immediately to the embryological laboratory and cryopreserved. The labeled oocyte vessels are stored in a special vault. They can be frozen for undefined period. However, an annual storage fee must be paid.

If you cannot get pregnant naturally, the eggs are thawed. Having survived this process, the cells will be fertilized with the partner's or donor’s sperm. The resulting one or more healthy embryos will be transferred into the woman's uterus through a catheter. Most likely, hormones will be prescribed before and after the transfer procedure for a successful implantation.

How safe is it to freeze oocytes?

Egg freezing is generally safe, but as with all medical procedures, there are risks and some long-term unknown factors, known risks similar to those faced by infertile couples undergoing IVF and egg donors.

In the short term, women who choose to freeze oocytes may experience side effects from hormonal medications (hot flashes, headaches, weight gain, etc.) and also have a risk of getting the syndrome of ovarian hyperstimulation. However, modern medicines, with a minimum of side effects, are selected so carefully that this risk is only 1%.

Egg collection is a painless and minimally invasive procedure. However, there is always a risk of puncture of nearby organs, contagion or infecting during embryo transfer. To prevent this from happening, you need to carry out manipulations in serious medical institutions and with an experienced doctor.

When more than one embryo is transferred, there is a risk of multiple pregnancy.

It is believed that increased doses of hormones can trigger cancer in the future. However, studies have not confirmed this, since therapy is carried out for a short time. And medications are quickly excreted from the body, there is no accumulation effect.

All long-term risks have not been investigated yet. Because the technology has not been around long enough. However, it can be said for sure that the freezing process does not increase the risk of congenital diseases in children. About 1000 children conceived from previously frozen oocytes by both methods (vitrification and slow freezing) were examined. The incidence of genetic birth defects was found to be similar to the overall population risk.

Selective freezing of germ cells gives women who need to postpone childbirth another option. While technology does not eliminate the realities of time and does not guarantee a future baby, it does increase the chances of conception. Compared to taking no action at all for those who want to have a child between the ages of 30 and 40.

Specialists of Feskov Human Reproduction Group use all possible safe and effective methods to give their patients the happiness of motherhood and fatherhood!