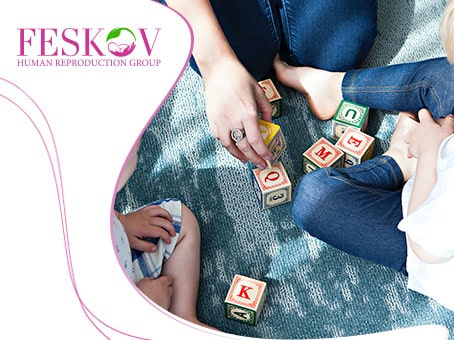 When people are forced to use an egg donor to start a family, they seek to find a donor that is as similar to them as possible. Many of the intended parents are well educated, with advanced degrees and other academic credentials. Faced with a reality in which they cannot pass on their genes to a child, the search for an excellent donor begins.

When passing egg donation programs in Feskov Human Reproduction Group, future parents can find a healthy candidate of any phenotype from an extensive database. However, are mental traits actually inherited?

In fact, the top priority when searching a donor is to find a healthy, adequate and happy woman who is ready to donate her genetic material for the benefit of other people. But, of course, it is natural for parents to want to see their continuation in their offspring. Intelligence is a complex part of human consciousness, which, in addition to genetic factors, is influenced by other factors.

However, not all is so simple. For many years now, scientists have been trying to break the genetic code of the intellect. This is a lofty goal, since even defining the concept of intelligence is not an easy task. The most complex human traits, such as intelligence, are multifactorial, that is, they consist of different concepts. These differences between people are influenced by both genetic and biological factors.

There are likely hundreds, if not thousands, of unidentified genes that affect intelligence or not.

Usually intelligence correlates with high academic achievement. However, many other multifactorial traits are likely to play a role as well:

Some studies have shown that high academic achievement can be even more hereditary than generalized intelligence alone. At the same time, it is known that such regalia is also influenced by many socio-economic factors:

But then what exactly is inherited by the baby, what are the traits and features from biological parents?

A simplified view of inheritance is that one pair of genes, one from each parent, controls one trait. These genes, and hence this characteristic, can be passed on to future generations in accordance with the classical genetics.technical rules. However, this is not usually the case.

Even a relatively “simple” trait such as hair, skin, or eye color is influenced by several different genes. Knowing the hair color of the egg donor can give an idea of what might be the baby's hair, but the resulting hair color will also depend on which specific versions of several genes the baby inherits. For example, the gene for blonde hair can be suppressed by the gene for dark hair. Since, usually, dark hair, eyes or skin belong to the dominant genes. But, there are always exceptions.

Other qualities, such as height or intelligence, are even less obvious. They not only involve many genes, but other factors that were discussed above are also strongly influenced. For example, growth involves a complex interaction of several hundred genes that control biological processes (bone growth, hormones, etc.). But it is also dependent on the quality of food. Simply put, the average height of children from the same biological parents will be between the height of a dad and a mom. However, if the sperm of a short man fertilizes the egg of a tall woman, the chances of having a tall baby are unlikely to increase. Genetics is not as simple as it seems at first glance.

Concerning donors, some of the existing traits will be inherited genetically (hair, eye color, skin), some will be partially transferred (height, mental ability), plus, they will be influenced by non-genetic factors. Other traits (moral principles, morality, spirituality) are generally not inherited and completely depend on the circumstances and environment in which a person grew up and lives.

Intelligence is a subjective quality. Which comes in different forms - a person with a doctorate degree, or someone who dropped out of school and opened his own successful business, or someone who created a unique innovation without education. Intelligence is determined not only by test results and educational institutions that have been attended.

We are all different. And this is great! Therefore specialists of Feskov Human Reproduction Group, with the help of reproductive services, fulfill people's dream of their own unique offspring!