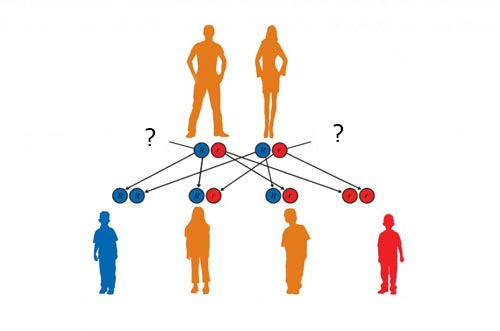 The scientists found out that about 40-60% of mental abilities are transmitted to us by inheritance from parents. In this case, the gene responsible for the intellect is located only in the X chromosome. A woman has two X chromosomes, and a man has only one, respectively, with the greatest probability the child will inherit from the woman.

The scientists found out that about 40-60% of mental abilities are transmitted to us by inheritance from parents. In this case, the gene responsible for the intellect is located only in the X chromosome. A woman has two X chromosomes, and a man has only one, respectively, with the greatest probability the child will inherit from the woman.

Studies have shown that paternal genes affect the formation of the limbic system or the so-called emotional intelligence, which is responsible for emotions, behavioral reactions, and a number of other important things. Female genes are involved in the formation of the cerebral cortex which is responsible for the level of intelligence and performs such important cognitive functions as thinking, developing strategies, learning languages.

Such a distribution of genes can cause certain fears and disturbances in married couples who are recommended to use a donor egg due to violations of the reproductive function of a woman. After all, this way a child can get «unknown intellect». But, if you approach the issue of choosing an egg donor seriously and deliberately, the risk of obtaining a low-quality genetic material will be reduced to zero.

In Ukraine, in the Surrogate Motherhood Center of the Professor A. Feskov's clinic, egg donors undergo very strict selection. All important indicators of a woman's health are checked, genetic predisposition to various diseases is investigated. In the focus of attention are other indicators. The couples who want to select a oocyte donor from the extensive database of the Center provide information on the growth, weight, hair and eye color, as well as on the social status and the formation of the egg donor. Thus, a complete picture is obtained, on which you can judge both the intellectual level of the woman donor  and choose the best genetic material for your child.

In addition, genetics is not the only factor that affects the child's mental abilities. The attachment between mother and child plays an important role. Studies have revealed that close emotional and physical contact between them, especially in the first years of life, helps the child to develop his mental abilities more actively. So, if you love your child and have more contact with him, then help himto develop his abilities to the maximum.

Ukraine is a very attractive country for reproductive tourism. The legally authorized donation of sex cells and surrogate motherhood, the high quality of services with a loyal price policy and the first-class genetic material provided to married couples - all this makes it possible to find the best options and successfully fulfill the dream of the birth of a child. We will help you find a suitable donor of oocytes, the genetic material of which will become a reliable basis for the development of high mental abilities of the baby. A genius, perhaps, he/she will not become, but at least an intellectual for sure!