What is it like – when the child has 2 mothers? 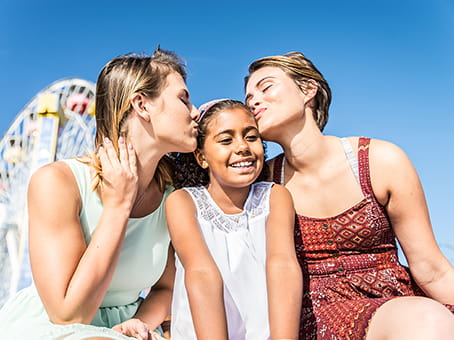 Modern reproductive technologies make it possible to have a child when a woman really wants it, even if there is no man in her life. In these days, more and more stories can be heard, when a child is born using IVF and donor sperm, and then is brought up in women's society.

We also want to tell you three such stories where there are no men but there are women who wanted to become mothers and fulfilled their desires..

From early childhood, Helen dreamed that she would have a daughter. But the very first visit to the gynecologist broke her dreams of a child – it turned out that she had Rokitansky-Küster syndrome, and if in simpler words, congenital absence of the uterus.

The physician explained: "This means that you can never bear and give birth to a child."

Helen grew up, but was unable to resign oneself to her childlessness, moreover, when all the friends one after another gave birth to children. At first, she considered the adoption option, but it turned out that it was very difficult - Helen was not married, and this complicated the matter very much.

And then she read in the magazine an article about surrogate motherhood and the hope of having a baby returned. The closest person, her mother, fully supported her idea. And even more, the mother proposed herself as the surrogate mother. It is good that her age (42 years) and sound health allowed her to carry a child - her own grandson. The IVF procedure involved Helen's egg and donor sperm.

In such a way there was born Jessica, whom Helen and her mother are now raising together. They have a very friendly and happy family, in which there are no men, but love and harmony reigns.

Julia and Natalie are friends since student times. They lived together in a dormitory, and then they rented together an apartment in which they continue to live to this day. Each of them had relationships with men, but at some point they realized that they did not want to marry, they wanted to remain free and independent.

Then Julia got pregnant and gave birth to Michael. This did not change her attitude towards marriage, and the man did not appear in the house. The friends still lived together, led joint life and helped each other. Natalie very attached herself to Michael and joked that she was his second mother. But once she realized that she wanted to have her child too. At that time, she did not have a man who could become a father for her child, so she went through the reproductive program with donor sperm and IVF. Everything worked out well, and very soon a little girl appeared in their apartment.

“I was discouraged from using donor sperm, they said that it was necessary to wait for “my man.” But I do not want to wait for something. I want to live now and raise a child. Now I feel comfortable and well, I am pleased with everything, and Julia very supports me. There are 2 mothers and 2 children living in our apartment, and this suits us absolutely!” - says Natalie.

Sofie and Eve have been living together for 5 years as a couple. Sofie always thought she had to give birth to a child when she is under 30, and when she turned 27, she told about her old dream to Eve. “I was very worried that Eve would not support me in this matter, but she immediately agreed, said that she also wanted us to have a child,”- tells Sofie. After durable deliberations and discussions, it was decided - they will use donor sperm and will resort to the help of a surrogate mother.

“We decided that I will give my egg,” says Sofie, “and the surrogate mother will carry the baby, it would be better for both of us.” There were a lot of agitations and concerns. They very carefully chose the sperm donor, I wanted him to be somewhat similar to both of us and we both liked him. From the first time, our surrogate mother did not become pregnant. We did not expect this. There was even a thought of giving up everything, but wish to have a child won over. We continued to try, and everything worked out. When Chris was born, we were in heaven! Now our daughter is growing up, she is already 6 months old and she has 2 mothers who love her very much!”

These three stories are very different, and at the same time they are similar in that they indicate how to go towards your goal and not be afraid of obstacles. If you really want a child, then nothing will prevent you from fulfilling your dream, because today there are no insurmountable obstacles along this way.

Feskov Human Reproduction Group offers reproductive programs that include a full range of assistive methods to make the birth of your child a reality. Our range of services includes comprehensive diagnostics, sperm donor selection, IVF, selection of a surrogate mother and other reproductive services that will help you to feel the happiness of motherhood!