Why Aren't More Men Aware of Their Fertility Status? 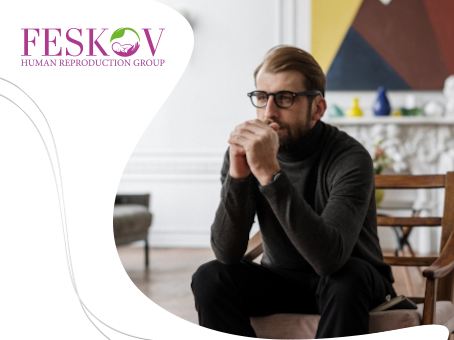 Until recently, it was customary in society to talk more about infertility in women than in men. Although, about 40% of all cases of problems with conception, according to medical statistics, are due to the male factor.

At the same time, it is much easier for doctors to resolve issues with male fertility than with female fertility. Competent prevention is often enough. And half of the men surveyed do not bother themselves with such issues at all. But when the problem cannot be solved, Feskov Human Reproductive Group comes to the rescue with the service of an individual sperm donor, who will give the family long-awaited joy!

Infertility is an urgent problem in about 15% of married couples trying to conceive a baby. This amounts to approximately 50 million families. At the same time, one third of all problems are associated with a partner, a little more than one third - with a woman, and another third are mixed issues or unknown reasons.

It so happened historically that infertility was considered more of a woman's problem than a man's. Most likely, this is due to the fact that women are more open emotionally, take more care of their health, agree to discuss such topics and look for the reasons for reproductive problems.

According to doctors, the male factor of infertility is quite common. At the same time, the representatives of the male half of humanity know little about the fact that, over time, the number and quality of spermatozoa decreases, as well as about simple steps that will help overcome such problems in the future. For example, freezing germ cells at a young age will significantly increase the chances of successful IVF after 40.

However, what can we say about ordinary men, if even the doctors themselves do not always focus on this. Only 41% of gynecologists refer a partner for examination to identify the cause of infertility in a couple. And 21% refer a man to a urologist just before taking a sperm sample from him.

This situation leads to the fact that only 9% of husbands agree that the reason may be in themselves. Although, timely and competent examination of both the woman and her partner will help to quickly find the true source of reproductive problems and begin the required treatment.

The beginning of identifying the source of male infertility is to analyze the semen. What doctors are considering:

When questions arise about one of these criteria, the reason becomes obvious. But sometimes it is much more difficult to define it. Poor quality or reduced sperm count of a patient is not always a source of fertility problems. As with female infertility, genetic factors, such as abnormalities of the Y chromosome, often come to the fore.

Other culprits for male infertility are:

However, most men do not see this as a problem at all. According to a survey of 1000 men, half of them not only are not aware of such information, but also do not care about their reproductive health at all. 77% of respondents have never done a semen analysis at all. Although 42% of those surveyed at the age of 25-54 admitted that they had problems with conceiving with partners.

The older men get, the more likely they are to need reproductive assistance. Therefore, the question arises - why do people say little about this, if the problem of male infertility is so urgent?

Gender stereotypes imposed by the media, supported by family and cultural traditions, as well as social pressure are the main reason why little is said in society about the fight against male infertility. Only 47% of men are ready to talk about it.

However, thanks to globalization and the rapid dissemination of information, these statistics are improving and males are included in an open dialogue.

One of the positive aspects of detecting infertility based on the male factor is the simpler therapy compared to the female factor. This is due to the fact that millions of germ cells are present in the ejaculate. And even with unfavorable patient indicators, about 100,000 individuals are quite normal. However, the IVF protocol can be successful in the presence of one single good sperm. Even if it is not active enough to fertilize an egg, it is simply injected manually into the female reproductive cell. And conception, in most cases, occurs.

Some doctors argue that it is better to take a bad sperm instead of a bad egg for the success of the exercise.

Everyone knows about the first, second and third trimester of pregnancy. But few people think about the zero trimester - that is, about the preparation of health and examination before such an important step. Although, many people spend more time planning a vacation than getting pregnant. And having a baby is a lifelong journey. And you need to be well prepared for such a trip.

So, the recommendations of doctors for men who want to experience the joy of fatherhood:

Based on the above, it is clear that fertility awareness is important not only for women, but also for their partners. So that, in the event of problems with conception, not to shift all the blame onto women, but to keep in mind that they can also be involved.

How to overcome the male infertility taboo?

The easiest and most effective way to combat deeply rooted male infertility prejudices is to talk more about it.

Despite the fact that questions with conception through the fault of a man are not much less common than through the fault of a woman, much more attention is paid to female infertility. This is because women are more open towards her body and health. They often talk and discuss such moments a lot. Therefore, such openness is gradually shedding light on the issues of male fertility, which previously were simply not accepted to talk about, thanks to a kind of social taboos. Especially when it comes to media coverage, where stereotypes are still strong.

Changing the approach to male infertility starts with a conversation!

Feskov Human Reproductive Group does not divide infertility into male and female, but simply helps people to become a happy family. Donation of genetic material has long been considered something supernatural when you want to have a baby. In the Center, even representatives of different races can find a suitable egg donor, so that the born baby matches as much as possible the peculiarities of the phenotype of any nationality!