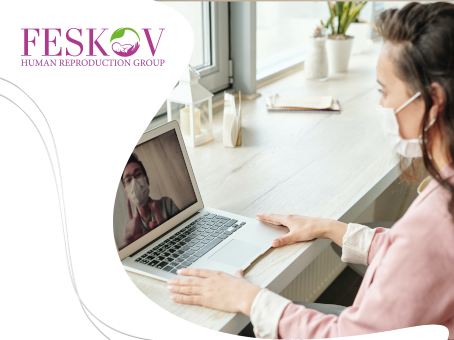 The crisis COVID-19 has affected all areas of human activity. It did not bypass reproductive medicine, in particular surrogacy. In the spring of 2020, during quarantine, Ukraine found itself in the very epicenter of an international scandal related to this method of ART.

Feskov Human Reproductive Group understands how things are in the branch, which largely depends on international relocation, as well as how surrogate mothers cope with the crisis.

As you know, Ukraine imposed quarantine on March 12, 2020 and issued a ban on foreign citizens visiting the country until June 22. On April 30, it turned out that 46 surrogate babies were in one of the Kiev hotels, since their foreign parents could not come for them.

At the same time, Ukraine is one of the few states where surrogacy is allowed at the legislative level and regulated.

Ombudsmen for human rights Lyudmila Denisova and Nikolai Kuleba, said that surrogacy should be authorized only for citizens of the country. They compared the commercial type of service with slavery, since it implies the exploitation of Ukrainian surrogate mothers. And also, they equated it with child trafficking. However, shortly after Denisova visited the  hotel with the kids, she helped the parents to resolve the issue. And in early June 2020, 79 foreign parents arrived in the country to take their children, despite the coronavirus restrictions. This is one of the cases that ended well. But what about the rest?

Surrogacy involves the creation of an embryo from the genetic material of the parents or donor, its implantation into the uterus of a surrogate mother, who bears the fetus until due time and gives birth to a child. In Ukraine, prospective parents pay, on average, depending on the clinic, agency and other factors, from $ 34 to $ 50,000 for a surrogate procedure (if necessary, with egg donation). In addition, surrogate mothers are paid $ 300-400 monthly for an apartment, food, clothing and other necessary expenses. And after childbirth - a one-time $ 15,000 compensation. Surrogates enter into an agreement with a reproductive clinic or agency, as well as with future parents.

Most Ukrainian surrogate mothers are married or single women with children. For them, this is a well-paid job, and few people are limited to only one contract.

During the quarantine restrictions, not only future parents faced difficulties due to the inability to pick up the babies, but also mothers:

Often, after childbirth, before the arrival of genetic parents, women are forced to care for and live in the same apartment with babies. Sometimes, agencies hire nannies to help mommy. Or they transfer babies to maternity hospitals before the arrival of their parents, in which they can stay without registration up to 28 days. However, the fact is that the woman who gave birth must stay with the child in Kiev. Indeed, according to the law, only she or the genetic parents can take the baby from the maternity hospital, after they have drawn up an official birth certificate for themselves. Therefore, in order to complete registration, parents and surrogate mother (who will not disappear before the paperwork) are needed.

Why is it difficult?

A crisis COVID-19 showed that, despite the fact that Ukraine has laws regulating the field of reproductive technologies, some points have blank spots.

One of the reasons for the emerging problems is the lack of well-coordinated actions between reproductive medicine and the authorities. Today, there are about 59 fertility clinics in the country. And none of them share statistics with the state. Approximately 38 institutions keep a report to the Ukrainian Association of Reproductive Medicine, which is not a state body, but a specialized organization. There is also no national registry for surrogate programs and egg donation. Therefore, it is impossible to know the number of births of surrogate children.

Besides, there were no instructions from government agencies during the quarantine, and fertility specialists also did not come up with a general plan of action. Each clinic decided this issue on an individual basis. Only 3 medical centers have completely ceased their activities. The rest carried out the existing programs and did not take new ones. Others, like Feskov Human Reproductive Group, worked with a certain amount of power. Those foreign couples who were able to come for the children are often indebted to the clinic's connections and its ability to resolve the issue at the embassies and the Ministry of Foreign Affairs.

Although, as practice shows, in fact, there were not so many obstacles to arrival as it seemed. Parents often flew in charter flights or came by car across the borders with neighboring countries (Belarus), which are open for private transport. And Israeli couples generally registered their baby at the embassy in one day and flew home, since the weekly flights to Israel have taken place despite the quarantine.

Although IVF clinics have all the necessary licenses and clearly indicate their responsibilities in the statutes, in fact, they are only responsible for the medical part of surrogacy (this does not apply to Feskov Human Reproductive Group). Organizational needs are covered by agencies which are not often even registered and cannot be prosecuted.

Fertility specialists in Ukraine understand that the sphere is not strictly regulated and the state does not interfere in it. On the one hand, this is a positive moment, since the clinic has the right to make independent decisions about medical aspects, international treatment protocols, etc. On the other hand, stricter regulation and control will help weed out irresponsible players who prefer quality and safety over profit and quantity, as well as clarify the rules of the game.

However, it is unclear which government agency will be able to intervene, since officials, who are not versed in the specifics of the branch, can lead to unwanted restrictions and prohibitions. This is evidenced by an incident at the beginning of the quarantine. What dramatic consequences for the foreign-oriented Ukrainian surrogacy branch can the closure of borders and obstacles in movement cause! As it turned out, many of these issues were resolved through informal contacts. And the disorganization of the branch players and their inability to give clear recommendations, taking into account the interests of all parties, is the main reason for the lack of government assistance.

Nevertheless, the pandemic prompted a rethinking of some aspects. For example, if genetic parents are sometimes not needed for surrogate conception (transportation of embryos or genetic material), then they are required for registration of a child. There are suggestions that the paperwork procedure can be simplified and everything can be done without the presence of a couple, subject to a power of attorney.

Also, Ukrainian surrogate mothers began to unite in organizations. Their main task is to teach women to analyze the proposals of agencies and clinics, to carefully read the signed contracts, to learn legal expertise in this matter. Thanks to the competent actions of mothers, unscrupulous intermediaries will disappear due to the lack of clients. However, Ukrainian women are against strict interference in the affairs of surrogate mothers. Because they are afraid of unreasonable prohibitions or demands to pay taxes.

Basically, public debate raises the topic of banning surrogacy for foreign citizens as well as greater transparency, regulation of rights and protection of all participants in the process. At Feskov Human Reproductive Group, mothers, parents, and children are reliably protected. However, it is believed that increased attention to the problem will still lead to the adoption of clearer laws on ART.