Be like Kim. Why you should not be afraid of surrogate motherhood 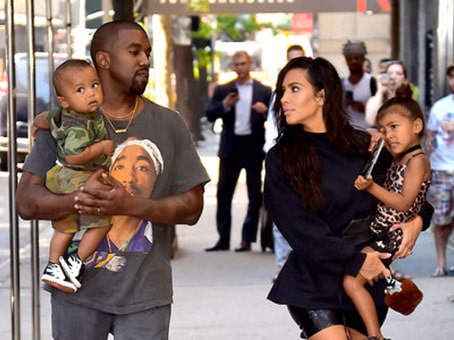 What to do if a woman really wants children, but because of health problems she cannot carry and give birth to them on her own? Modern medicine offers a way out of this situation - the use of a surrogate mother.

This newest medical technology was created to help couples with reproductive problems to fulfill their dream of becoming parents. And it really fulfills its mission. A vivid example of this is the story of Kim Kardashian, who was not afraid to use the services of a surrogate mother for the birth of her child.

The world-famous American movie star and model Kim Kardashian already had two children (daughter North and son Saint), whom she gave birth by herself. But she and her husband, Kanye West, wanted a third one. The first two Kim's pregnancies passed with complications. During the second pregnancy she had serious difficulties: there was severe preeclampsia, there were problems with the placental attachment.

However, Kim really wanted a third child, and for this she decided to have an operation, during which a part of scar tissue in the uterus was removed. But the operation did not help.

“I will not be able to have children anymore. This is the worst thing that could happen to me”, said Kim at that moment.

She was very upset, but not ready to give up the dream of a third child.

It was a very joyful event for the family.

“Kanye and I are happy to announce the birth of our healthy, beautiful girl. We are incredibly grateful to our surrogate mother, thanks to whom our desire became a reality”, wrote Kim.

But Kim Kardashian always dreamed of four children, so she decided to use the services of a surrogate mother again. Today it is already known that the star couple is waiting for the boy again, who is carried by the surrogate mother, and who is to be born in early May 2019.

This story very well shows how surrogate motherhood helps to make your dreams come true, to become parents, even if your health condition makes it difficult to give birth to a child in the traditional way.

Surrogate motherhood is not only for stars

Kim Kardashian's story is very inspiring, but it is about a world famous star. How realistic is it to use surrogacy for an ordinary family couple?

Couples who cannot give birth to a child themselves, but want it very much, can come to a reproductive clinic today and get a full range of services. The clinic will help you to choose a surrogate mother, if necessary, provide donor genetic material (eggs or sperm), fertilize, transfer the embryo into the uterus of a surrogate mother, monitor her pregnancy and carry out delivery.

Of course, surrogacy is not a cheap service. But the realization of the biggest dream - the birth of a child is at stake! So, the costs are fully justified.

Why childless couples should not be afraid of surrogate motherhood

Many childless couples would like to use the services of a surrogate mother, but they are afraid to do it. Such fears are caused by a lack of understanding of the process.

Often, men and women ask the question: “Will such a child have our genes? And will he or she look like us?”

Of course it will be your child! If the egg cell and the sperm cell of your couple are involved in the creation of the embryo, the child will be 100% genetically yours and will certainly look like you. And even if you have to use a donor egg or donor sperm during fertilization, the child will still be 50% with your genes.

A rather common fear is the fear of choosing an unreliable surrogate mother.

But if you do not look for surrogate mothers in some illegal way, and go to a clinic with a good reputation, then any worries about this can be ruled out.

The Feskov Human Reproduction Group conducts a very strict selection of women for surrogate motherhood, checks all the important health indicators, mental state, selects women without bad habits. And the entire pregnancy a surrogate mother is under the close supervision of the doctors of the clinic.

Another “popular” fear is that a surrogate mother will not want to give you the child.

In Ukraine, all the details of the use of surrogate motherhood are spelled out in the laws. In many reproductive clinics you will be offered full legal support. If you contact the Feskov Human Reproduction Group, then a detailed contract will be drawn up in which all your rights and obligations will be registered, and after the birth the child is guaranteed to be yours, without any problems and claims from a surrogate mother. After birth, you will receive a birth certificate in which you will be listed as parents, and this certificate will be valid in any country.

Do you really want a long-awaited child in your family? Do not give up on your dream! Go to your goal! And surrogate motherhood let it be a tool that will help you with this!