I want to have twins. How IVF and surrogate motherhood will help this 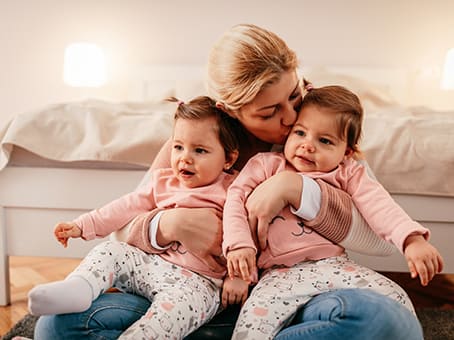 Many family couples want to have twins since birth of a child is always happiness, so birth of twins is doubled happiness! They dream about large family, confident that it will be easier to raise the two at once, and that, in this case, the children will have more fun and frolic. But the probability of multifetal pregnancy and birth of twins is much lower than that of birth of single baby.

According to statistics, the twins are born with frequency of 1/80. In this case, more often the dioval twins are born (people call them twinsies). This happens when two eggs are fertilized and develop simultaneously. In this case, both children of the same sex and children of different sex may be born who will be similar to each other like brothers and sisters. The monoovular twins are born 4 times less often. This happens when 1 egg is fertilized, but then it divides into 2 parts, two embryos form and two babies of the same sex and with the same set of genes are born.

Is it possible to increase the chances of having twins? And are there any methods to guarantee the birth of twins? Let's find the answers to these questions

The main natural factor that increases the probability of having twins is heredity. If there are twins among your close relatives, then your chances considerably increase.

In addition, the probability of having twins is influenced by race and age. Statistics show that most often twins are born among immigrants from African countries, and among Asian women, this happens least often. More often, twins are born by women above 30 years old, and the more children the woman has, the higher the probability of having twins.

However, the greatest chance of having twins is provided by the use of assisted reproductive techniques.

But the most reliable way of occurrence of multifetal pregnancy consists in use of IVF procedure.

How IVF helps to give birth of twins

In case of in vitro fertilization (IVF), the eggs and sperm are taken from the family couple and fertilized "manually" in a test tube. And then several viable embryos are formed. A few embryos can be transplanted into the woman’s uterine cavity, and then the probability that all of them will survive and a multifetal pregnancy will occur is very high. The reproductive medicine clinics even offer separately such a service as multifetal pregnancy provided through the use of IVF.

However, family couples who dream of twins should be aware that carrying twins is connected with additional risks to the health of the woman and increases the risk of miscarriage.

Surrogate motherhood will help to avoid problems with carriage of twins

Surrogate motherhood will help solve this problem: if your own health cannot allow you to carry twins, you have the opportunity to use the services of a surrogate mother who will have sufficient health to bear your babies without any problems.